Lead Acid battery is touted as the cheapest battery available. In fact, Lead Acid is the family name for a collection of closely related battery types, from simple vented/flooded to advaned Valve Regulated ones. Depending upon the type of usage, there are shallow and deep cycle batteries. Typical examples of shallow cycle batteries are the ordinary car starter batteries, where as deep cycle batteries are used for prolonged deep discharge operations like electric propulsion, UPS etc. For a comparison, some reasonable Deep Cycle flooded batteries are available for around $120 per name plate KWh. This “lowest cost” has given a lot of advantage for Lead Acid batteries in renewable energy applications. But before getting deep into the deep cycle lead acid batteries there are a lot of interesting facts to consider.

Both capacity and the state of charge depend heavily upon a factor named Vpc which is nothing but Voltage per Cell. Normally all standard battery manufacturers quote their capacity to 1.75 Vpc with a discharge time of 20 hours. In simple language, it is the capacity until the voltage of the cell reaches 1.75V with a discharge period of 20 hours. 1.75 V is considered as 0% State of Charge. As Depth of Discharge (DoD) is just the opposite of State of Charge, it is nothing but 100% Depth of Discharge. But discharging up to that level puts a lot of stress on the battery, so that, the battery could only handle very limited number of cycles in that manner. In short, 100% DoD is not at all preferred for lead acid batteries.

All Capacities are equal, but some are more equal than others

Another interesting parameter is the “name plate” capacity mentioned on the battery. Normally a “120AH” battery gives an implication that, it could give 1A for 120 hours, or 120 A for 1 hour, or 20A for 6 hours or whatever combination of that which gives 120AH as the multiplication output. But, in reality this is not the case. Faster discharging try to reduce the available capacity of the battery drastically. As stated above in the previous section the “name plate” capacity is quoted at C/20 which means at a very slow pace of 20 hours to discharge the battery. Many standard discharge applications using inverters do require much higher discharge rate. Available capacity of a battery could be computed using an empirical law named “Peukert’s law”. The following figure shows the available capacity of a typical Lead Acid battery against discharge time. 100% capacity is stated for 20 hours. 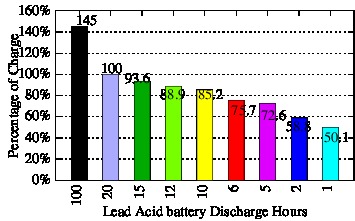 Total usable cycles of the battery is very much related to the regular depth of discharge. For a regular 80% DoD, a typical battery lasts for around 600 cycles, but if we use 50% DoD, it lasts for around 1200 cycles. There are many telecom batteries which are advertised for 20 years, but they have a rating of 5% to 10% DoD which is ridiculously low(fine prints again). The following graph from windsun.com and Concorde batteries shows the relation between available cycles and Depth of Discharge

Apart from that, there are a few “solar batteries” which could give around 2100 cycles at 80% DoD, like the HuP Solar battery. But they also cost a lot, somewhere between $200 to $300 per KWh
HuP Solar Information

There is a clear disadvantage of the better cycle life and lower DoD. More batteries have to be kept in parallel to store the same amount of electrical energy. That means at 80% DoD, 125% capacity is required whereas at 50% DoD, the requirement would become 200%. If the above mentioned telecom battery is used, the requirement would go more than 1000% !!

So, basically it is a trade-off between capacity, DoD and number of cycles.

That is the story of Lead Acid battery. Let us consider two other types of batteries.

Sodium Sulphur could be a very good solution for large scale storage spanning upto MWh range. NGK Insulators of Japan supply these batteries at a price of around $350 per KWh. They are quoted at 2500 cycles at 100% dischange or 4500 cycles at 80% discharge that too at a 6 hour discharge rate. Similar to Lithium Ion, NaS battery has much better energy density compared to Lead Acid, so the weight and volume are also much lower for the same capacity.

Let us say that we have to select a battery for renewable energy applications. Since in most cases levelized cost is calculated for a period between 20 to 30 years, we select 9000 cycles which comes very close to 25 years. Assume that the battery has to be discharged in 6 hours. Let us see how these options stand against each other. See the table at the bottom for detailed explanations.

It is very easy to jump to conclusions by seeing the nameplate capacity cost, but actual levelized cost/KWh/cycle is an entirely different story. Cheapest lead acid battery is the costliest to operate in the long run. For small and portable storage applications Lithium Iron Phosphate could be an excellent option. For large installations, Sodium Sulphur could give drastic cost and performance advantages.

Peukert’s law:
Capacity of Lead Acid battery is computed using the following eqution, as given by An in depth analysis of the maths behind Peukert’s Equation (Peukert’s Law)
T=C x ((C/R)^n-1) /(I^n)
Here n is taken as 1.3 for Lead Acid Battery.

Battery Levelized Cost:
Total cost of batteries to store 1KWh is computed as follows
Multiplier Factor = (1/DoD) x (1/(6 Hours Capacity Factor)) x (Number of times battery has to be replaced to get 9000 Cycles)
6 Hour Capacity Factor is 75.7% for Lead Acid Batteries. Since the capacity of Lithium Ion does not degrade for 6 hours, the factor is taken as 1. For Sodium Sulphur, the name plate capacity itself is stated for 6 hours, so the factor is 1 for that too.
Number of usable cycles for Lead Acid is taken as 750 and 1500 for 80% and 50% DoD respectively.
Total Cost = Cost/KWh nameplate x Multiplication Factor
Levelized Cost = Total Cost / 9000

This is the summary of all these calculations. All prices are in US Dollars only.

6 thoughts on “Lead Acid is the cheapest battery: *Conditions Apply”